The Canadian will have to restart his attack to support Price 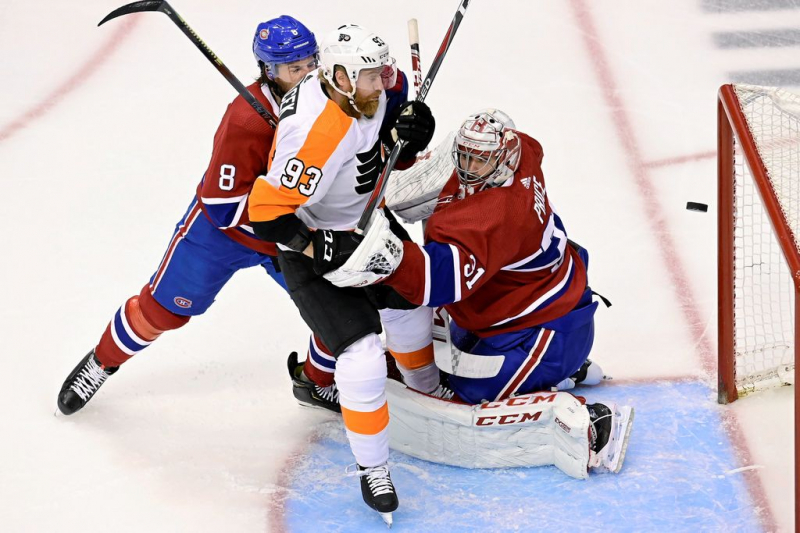 Game 4 between the Flyers and the Canadiens will be played on Tuesday at 3 p.m.

Share August 17, 2020 3:35 p.m. Share The Canadian will have to restart his attack to support Price Alexandre Geoffrion-McInnis The Canadian Press Goalkeeper Carter Hart of the Philadelphia Flyers certainly received help from his posts in Game 3 against the Montreal Canadiens. But interim head coach Kirk Muller's men will have to do more if they are to come out on top of this best-of-seven series.

After the fireworks display last Friday, in which the Habs scored five goals and kicked Hart out of the game, the Montrealers were dropped from the scoresheet for the first time since their official entry into the Toronto bubble on Sunday. in a 1-0 loss.

There is no need to panic, Muller assured Monday, but players will need to remain disciplined and find space to create scoring opportunities if they want to oust the Flyers. After all, they've only conceded three goals in as many games, but are trailing 2-1 in the series.

“We cannot be frustrated,” Muller hammered in videoconference. It's the playoffs, you have to fight for every inch on the ice. We saw him yesterday with “Gally” (Brendan Gallagher); he's fired three shots, and usually those go into the net. We must continue to build on our strengths to achieve results. We have to believe it.

“There was only one goal. I know we hit a few posts, and if just one of those shots had gone into the net, then we don't know what would have happened, said the CH pilot. But we must not feel sorry for our fate. We can control the puck better, improve some facets of our game and that's what we'll do for tomorrow's game. ”

Among those who will need to raise their level of play a notch is striker Jonathan Drouin, who was particularly discreet in Sunday's game – he only landed two shots in 17:00 of playing time.

The Quebecer admitted that the Flyers had done a good job in blocking his route in the neutral zone, thus preventing him from picking up speed and causing things to enter enemy territory.

“They (the Flyers) are physically impressive and applied a good forward check on our defenders. We have to find a way to give our defenders more time to play outside the zone, he admitted. We will have to avoid games along the ramp, create space for ourselves and be constantly on the move. “

The Canadian was shut out in three power-play superiorities on Sunday, but all is not lost. The Bleu-blanc-rouge can take comfort in thinking that he prevented the Flyers from scoring in six power play.

“We are a team that excels five to five,” said Drouin. We are better on equal terms. It was hard to find momentum because of our penalties yesterday – they're a good team, especially on the power play when their players are moving the puck. We will have to make sure to stay on a level playing field, that we avoid the punishment box. ”

For the Flyers, head coach Alain Vigneault admitted there was still work to be done on the power play. However, as is the case with the Canadiens, Vigneault believes it is only a matter of time before his troops find their bearings.

“We will make some adjustments on the power play. Yesterday (Sunday), we were able to cause six penalties for the Canadian, so we spent a lot of time in their territory, ”he recalled first by videoconference.

“I'm an eternal optimist, and I believe that with the players we have we will soon be able to make them 'click'. I felt in our last 20 games (before the pandemic) that our players had found a way to “click” together. Execution is lacking right now, and we'll be making a few small adjustments, but we spoke with the players this morning during practice and I believe we will have a plan in place for tomorrow's game, ”a summed up the Québécois.

Even though Vigneault has remained rather vague on how the Flyers plan to go about deceiving Carey Price's vigilance more often, forward Sean Couturier has advanced a bit more on this.

“We want to make the life of the opposing goalkeeper as difficult as possible,” he explained. It's hard for a goaltender to make the save when he can't see the play, so you have to emphasize that. We also have to shoot more at the net, and recover the throw returns. ”

Game 4 will be presented on Tuesday at 3 p.m.

Teilor Stone has been a reporter on the news desk since 2013. Before that she wrote about young adolescence and family dynamics for Styles and was the legal affairs correspondent for the Metro desk. Before joining The Bobr Times, Teilor Stone worked as a staff writer at the Village Voice and a freelancer for Newsday, The Wall Street Journal, GQ and Mirabella. To get in touch, contact me through my teilor@nizhtimes.com 1-800-268-7116
Previous ArticleHart and Flyers shutout Canadian 1-0
Next ArticleThe Canadian suffers another shutout and will face elimination