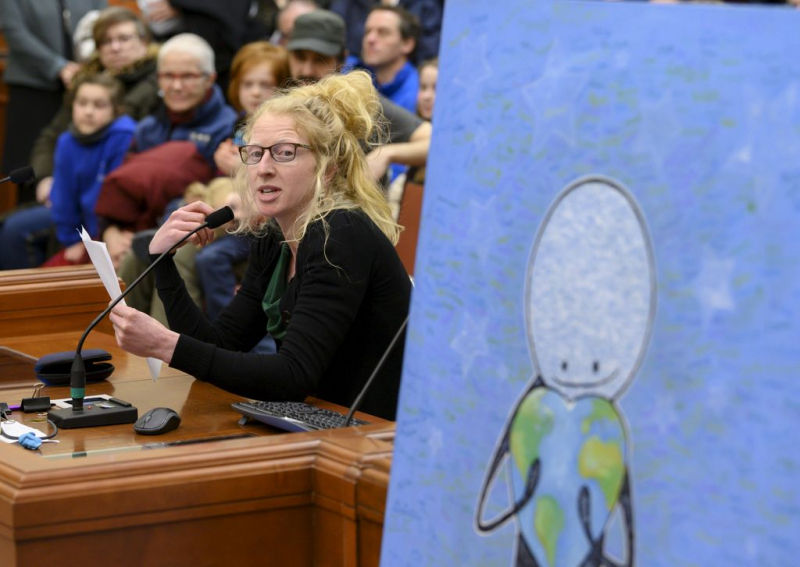 Stéphanie Leclerc is the leader of the canvas project as a reminder of the commitment of the City of Sherbrooke to fight climate change.

Jonathan Custeau La Tribune Elected officials could decide not to follow the recommendation of the City of Sherbrooke's visual arts commission and to display Ultra Nan's work on climate change in the municipal council chamber. Mayor Steve Lussier at the very least left a door open on Monday at city council, after an intervention by the president of the environment committee, Karine Godbout.

At the beginning of September, the president of the culture committee, Paul Gingues, indicated that the work signed by more than 1,800 children and offered to elected officials in February was not part of the collection of works of art of the City. Therefore, the Visual Arts Commission did not recommend displaying it in the council chamber. It was then mentioned the possibility of projecting a photo among the images of the City broadcast on a screen during municipal councils.

At that time, councilors Évelyne Beaudin and Annie Godbout had shown their discomfort. Karine Godbout added her voice to that of her colleagues on Monday.

“The first thing I did to better understand this issue was to call my colleague Paul Gingues. He had an openness to find a simple way to meet the demands of citizens. In this file, in the initial mandate, perhaps naively, I thought that the mandate of the visual arts commission was rather to tell us where we could put the work in the municipal council because it is offered as a reminder to advice. Finally, there was a full analysis. “

“For me, it was clear that the council was very touched by this collective work. I think that there is reason to wonder following the recommendation. I wish to say that I am an ally in this file. We are looking for solutions and ways to respond to the initial demand of citizens and the group of students. You just have to see how we can materialize all this. I ask you for a little patience so that we can move this file forward and respond to your requests. “

The recommendation of the visual arts commission had been rather badly received by the group Urgence Climat Sherbrooke. In a letter sent to La Tribune, Stéphanie Leclerc, manager of the file, believes that the City does not encourage citizen participation.

“We are disappointed with the decision, with its symbolic significance, but also with the lack of communication from the City. Our emails went unanswered and it took La Tribune to tell us the status of the project in which we have invested hundreds of hours, ”she wrote.

Naming other projects for which citizens have not had any follow-up, such as that of shared streets, Ms. Leclerc describes the City as an extinguisher. “If Sherbrooke is keen on citizen participation, it is on the wrong track by increasing the number of missed meetings. More than anything, what message does the city send to the children who signed the canvas? For the majority, it was their first civic experience. “

She concluded by mentioning that confidence in a partnership with the City is starting to be scarce.

Teilor Stone has been a reporter on the news desk since 2013. Before that she wrote about young adolescence and family dynamics for Styles and was the legal affairs correspondent for the Metro desk. Before joining The Bobr Times, Teilor Stone worked as a staff writer at the Village Voice and a freelancer for Newsday, The Wall Street Journal, GQ and Mirabella. To get in touch, contact me through my teilor@nizhtimes.com 1-800-268-7116
Previous ArticleA couple from Sherbrooke find themselves without a license and without a car
Next ArticleSpeed measurements on rue des Épinettes