The coronation of Hubert Lenoir at the Francos de Montréal

Hubert Lenoir was performing at the Francos on June 14th.

Hubert Lenoir celebrated his return to La Belle Province with great fanfare by offering his “biggest show ever” at the Francos de Montréal on Tuesday evening. If he was “the eighth most hated person in Quebec” in 2018, according to a poll by Journal de Montréal, he is now crowned prince of Quebec rock.

For the past few weeks, Hubert Lenoir and his group have been back in Quebec to tour the province's festivals this summer after two international tours, a first at the United States and another in Europe.

The festivities were launched in Santa Teresa on May 20, then the musician from Beauport offered a few surprise concerts.

But that was only a taste of the colossal spectacle that Hubert Lenoir gave to the Francos, the “first official in Montreal” of this summer tour. The beast of the stage set the Place des Festivals on fire, where an audience of all ages gathered.

“You came with your mother, it’s smatte… No , but you are rather young all the same”, launched the artist, dressed in a pink checkered dress with a construction vest, at the start of the concert.

The few gray heads have sobered up during the mosh pits.

From the first chorus of Golden Days, Hubert Lenoir thrown into the crowd among the most daring in front of the stage. From that moment it was already the party.

And even if the songs from his second album, PICTURA DE IPSE: Direct Music< /em>, are “harder to approach”, as the artist himself admitted on Tuesday evening, the fans were there.

Although he said he had received homophobic death threats for a long time, today thousands of people come to sing along to the songs of the interpreter of Secret.

It is for this song that Hubert Lenoir and his co-authors Félix Petit and Julyan have just won the 2022 SOCAN Song Prize, worth $5,000.

In 2018, I was voted in a poll by the Journal de Montréalthe eighth most hated person in Quebec… Look at me now baby! But it's just to tell you that time does things well, continue to be who you are!

In addition to three songs from his first album, Darlène, released in 2018, Hubert Lenoir performed almost all of his most recent album PICTURA DE IPSE: Direct Music.

Like this last opus, the show was inspired by direct cinema as it was popularized in Quebec by filmmakers like Michel Brault and Pierre Perrault.

With her VHS camera, the manager and partner of the singer, Noémie D. Leclerc, walks around and films the concert action live on the stage. The images of the musicians or the crowd are broadcast directly on the giant screens, in a somewhat chaotic way. It's hard not to be in the moment with such a total experience. 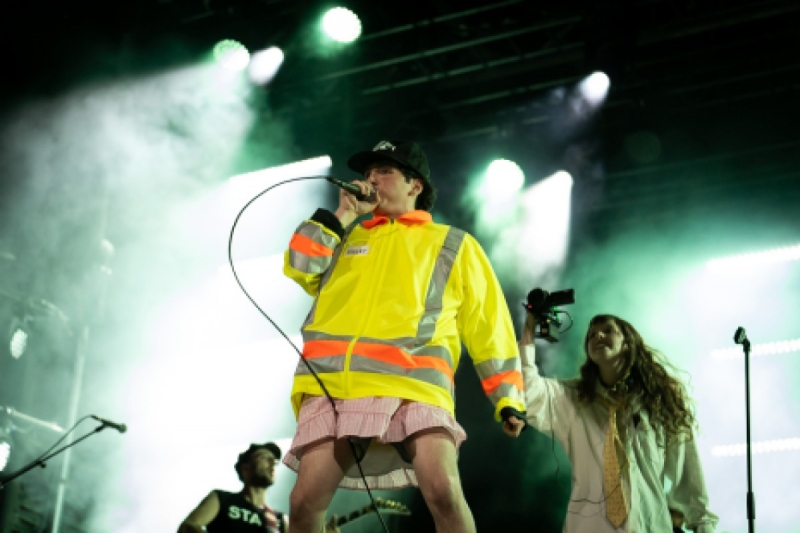 Hubert Lenoir was performing at the Francos de Montréal.

As is the tradition of the Francos, but also as they have accustomed us to, Hubert Lenoir and his team have reserved a few surprises for the public, whether by smashing a guitar (and a drumstick drum) or by performing excerpts from Katy Perry and Les Cowboys Fringants.

The icing on the sundae? For the very last song, Begin again, the rocker sang on his knees among the crowd that lifted him up. With a two-hour show, including two encores, the public can only be won over.

Hubert Lenoir and his musicians will return to the festival stages several times this summer and will return to Montreal for the International Jazz Festival.

Teilor Stone has been a reporter on the news desk since 2013. Before that she wrote about young adolescence and family dynamics for Styles and was the legal affairs correspondent for the Metro desk. Before joining The Bobr Times, Teilor Stone worked as a staff writer at the Village Voice and a freelancer for Newsday, The Wall Street Journal, GQ and Mirabella. To get in touch, contact me through my teilor@nizhtimes.com 1-800-268-7116
Previous Article'Please do not send flowers' travels to Italy
Next ArticleLuce Dufault, her Scotch evenings and her Marseillais