The Cowboys Fringants show at MTelus postponed to June 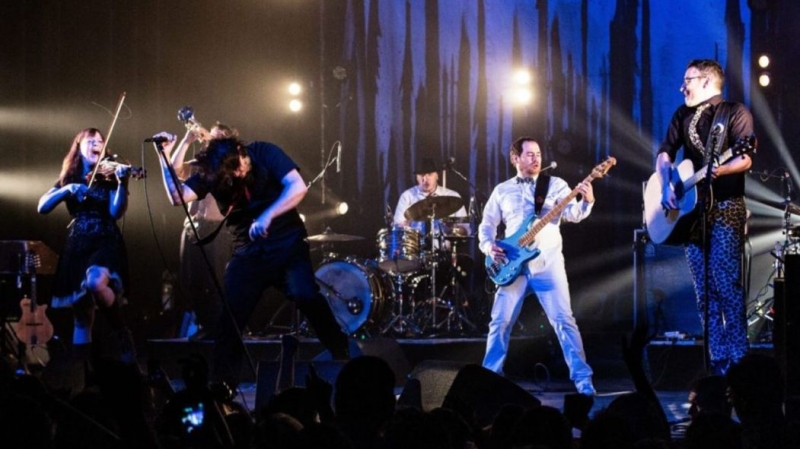 Due to the new sanitary measures announced on Thursday evening, the Cowboys Fringants show which was to take place this Saturday, December 18 at MTelus has been postponed to June 4, 2022.

No decision has yet been made regarding their show at the Bell Center on December 27, the press secretary of La Tribu, Marie-Christine Champagne.

From Monday, performance venues will have to reduce their capacity to 50%, accommodating up to a maximum of 250 spectators.

< p>In a press conference Thursday evening, the national director of public health, Dr. Horacio Arruda, indicated that decisions had to be made for the events planned for the weekend.

La Tribu, which produces the Cowboys Fringants shows, has therefore chosen to postpone the one scheduled at MTelus this Saturday.

Even if he expected government announcements “for 48 hours, especially since the announcements of the Ontario government which have reduced by 50% for amphitheatres of more than 1000 places and the increase in the level of cases”, David Laferrière, Chairman of the Board of Directors of the Professional Association of Show Presenters & # 8211; RIDEAU and General and Artistic Director at Diffusion En Scène & # 8211; Théâtre Gilles-Vigneault, is no less surprised by their harshness. “We have the vaccine passport, the mask at all times, so we weren't expecting very aggressive measures,” he explains.

According to him, it will now be necessary to be responsive to adapt to the new health rules. “When we sell tickets and bring back new restrictions, we have to redo room maps, remind all the ticket holders, explain the situation to them.”

We can no longer ignore the fact that we have 20 months of pandemic and that there is a total exhaustion of the teams.

As for movie theaters, the same story goes. “It's a big blow, but we can only understand this gesture given the situation in which we find ourselves. After 21 months, it still starts to hurt & # 8230; ” says Éric Bouchard, co-president of the Association of Quebec Cinemas Owners.

Since cinemas usually don't work with many presales, this one feels lucky in the end. “When I see theaters, I don't complain. For them, it & rsquo; s quite a gymnastics, he specifies. Theaters have always been safe places and we will continue to enforce the rules. ”

Finally, David Laferrière does not want to give up. “I'm pretty optimistic this is a major step, but I hope it doesn't go on forever.” He also underlines the importance of the financial aids which are granted to cultural institutions. “It must be said, we are privileged. Then we want to make sure that all the trades receive their shares, “he concludes. & Nbsp;

Teilor Stone has been a reporter on the news desk since 2013. Before that she wrote about young adolescence and family dynamics for Styles and was the legal affairs correspondent for the Metro desk. Before joining The Bobr Times, Teilor Stone worked as a staff writer at the Village Voice and a freelancer for Newsday, The Wall Street Journal, GQ and Mirabella. To get in touch, contact me through my teilor@nizhtimes.com 1-800-268-7116
Previous ArticleSafia Nolin “unplugged” version at Bon-Secours, we were there!
Next ArticleThe time Pythia almost won “Canada’s Drag Race”