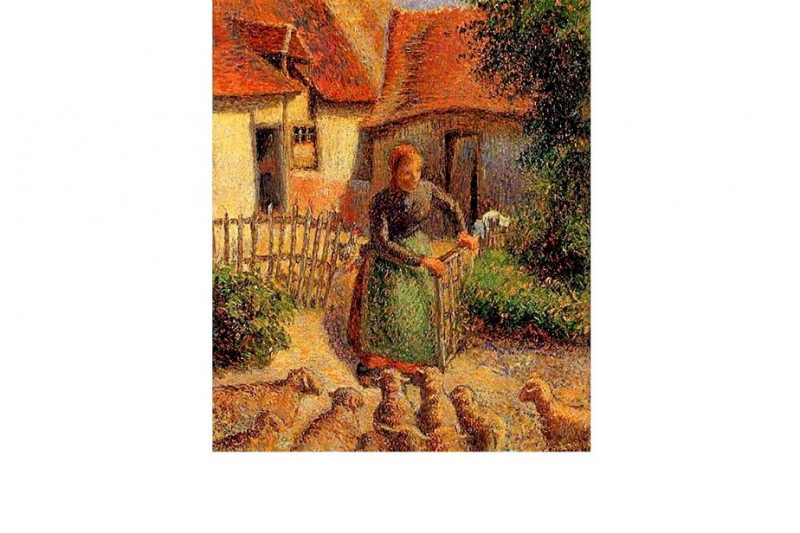 The shepherdess returning from the sheep by Camille Pissarro (1886)

Share November 4, 2020 3:19 p.m. Share The future of a Pissarro looted by the Nazis soon to be brought to justice Agence France-Presse PARIS – The daughter of a collector looted by the Nazis has seized French justice to obtain the cancellation of a agreement concluded with an American museum and the return of a painting by Camille Pissarro, which is due to return to the United States in the summer of 2021.

Léone-Noëlle Meyer, 80, asks for the invalidation of a transaction signed in 2016 with the University of Oklahoma Foundation, with the aim of donating the painting La Bergère returning from the sheep , painted in 1886, to the museum d'Orsay, said his lawyer.

This impressionist oil on canvas, which had belonged to his adoptive father Raoul Meyer since the 1930s, was confiscated in February 1941 by the Nazis.

At the end of the Second World War, it was shipped to Switzerland, acquired by an art dealer and then by the couple of collectors Aaron and Clara Weitzenhoffer, who bequeathed it in 2000 to the University of Oklahoma, for the attached Fred P. Jones Museum.

Ms. Meyer, whose father ran the French department stores Galeries Lafayette and who herself chaired the group's supervisory board, tracked down the painting in the early 2010s and brought an action for restitution before the American courts.

Following negotiations, an agreement was finally signed on February 22, 2016. It provided for the title to be transferred to Ms. Meyer and that, after 5 years of exposure in France, a rotation would be ensured every three years. between France and the United States.

Mrs. Meyer was also to donate the painting during her lifetime to an artistic institution in France, approved by the American museum. However, the Musée d'Orsay, which is currently exhibiting the canvas, refused this donation, considering that the rotation was too restrictive.

The painting is scheduled to return to the United States on July 16, 2021.

“Madame Meyer is fighting for the right to donate this painting to the Musée d'Orsay. We hope that the University of Oklahoma will no longer take refuge behind procedural artifices, ”his lawyer, Ron Soffer, told AFP.

“The thousands of members and amateurs of Impressionist art” of the museum and of the American university “are surprised and disappointed”, reacted their French lawyer, Olivier de Baecque.

“Attached to this work, promised to be returned every three years”, they “express their confidence in French justice”, he continued. “This sharing” of the painting “symbolizes the dialogue between audiences and cultures to which the museum tirelessly intends to contribute”.

A first hearing is scheduled for December 8 in Paris to place the painting in receivership. Then, on January 19, Mrs. Meyer will ask the court for the “full and complete” restitution of the work, by virtue of the ordinance of April 21, 1945 on looted property.

Teilor Stone has been a reporter on the news desk since 2013. Before that she wrote about young adolescence and family dynamics for Styles and was the legal affairs correspondent for the Metro desk. Before joining The Bobr Times, Teilor Stone worked as a staff writer at the Village Voice and a freelancer for Newsday, The Wall Street Journal, GQ and Mirabella. To get in touch, contact me through my teilor@nizhtimes.com 1-800-268-7116
Previous ArticleKanye West discusses new candidacy in 2024
Next ArticleThe Rolling Stones enter the museum