The game of the queen: A stroke of “great master” 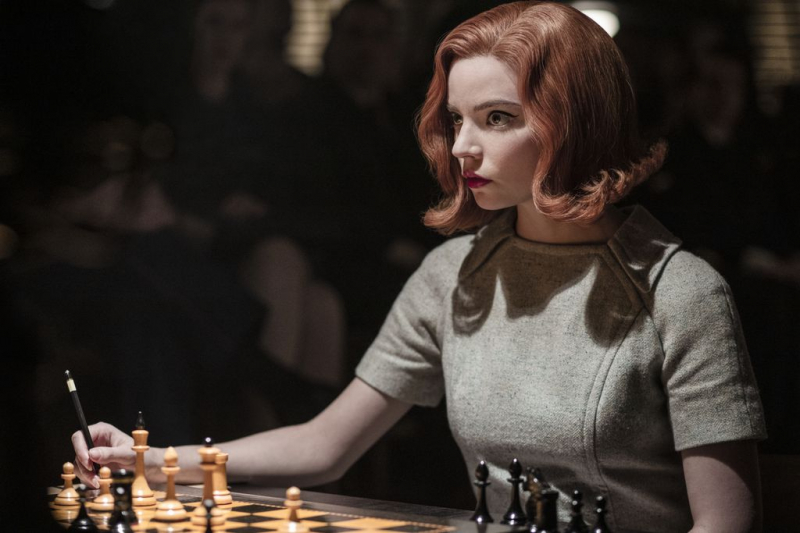 Share November 16, 2020 9:21 am Share The lady's game : A stroke of the “grandmaster” Aurélie Carabin Agence France-Presse PARIS – A stroke of the “grandmaster”: fall surprise card on Netflix, the mini-series “The game of the lady ”(“ The queen's gambit ”) brilliantly retraces the journey of a chess prodigy and fascinates neophytes and experienced players, seduced by her realism.

Adapted from the eponymous novel by Walter Tevis, published in 1983, this seven-part series set in the 1950s and 1960s recounts the meteoric – and fictitious – rise of an addicted orphan from Kentucky, Beth Harmon, into a world very masculine.

Impressive performance by the main performer Anya Taylor-Joy, neat sets, duels around the chessboard more captivating than a boxing fight: the work of Scott Franck ( Godless , Logan ) and Allan Scott, almost online on the sly on Netflix at the end of October, is greeted from all sides, word of mouth having propelled it to the top of the most viewed series on the platform.

Among chess lovers, conquered, it is the excitement. This is evidenced by the flowering of articles and videos devoted to the series by specialized publications or the almost unanimous comments of players on social networks.

“It's the best thing I've seen about chess,” said the French international grandmaster Anthony Wirig, during an online conference organized around the series by the site Learn chess in 24 hours.

“It moved a lot of people to see the atmosphere so well broadcast, this carnal link that we have with the game”, explains to AFP Pierre Petitcunot, co-founder of the site.

Same story with the president of the French Chess Federation (FFE), Bachar Kouatly. He welcomes “a formidable series close to reality”, which is based on “very dense literature” and “real parts”, taken from real competitions.

This is because the series, very documented, benefited from the expertise of the legendary Garry Kasparov, the former Russian world champion officiating as a consultant, with the American coach Bruce Pandolfini.

The character of Beth Harmon is partly inspired by Bobby Fischer, American prodigy who became world champion in 1972 at the end of the “match of the century” against the Soviet Boris Spassky, in the middle of the Cold War.

Some errors remain during the editing, as Anthony Wirig noted, citing in particular a game played in an airplane. The French title of the series, The game of the lady , is also ticking. Queen's Gambit , the English title, designates an opening to chess which translates into French as “gambit dame” (and not Jeu de la dame) .

And the actors do not have “the elegance of touch” of real players in “the movements”, believes Bachar Kouatly. Nevertheless, “it is filmed in a sublime way,” he insists.

“Many will certainly start chess thanks to this series,” anticipates Bachar Kouatly.

In fact, the site Learn chess in 24 ha saw its number of visitors multiplied by 10, from 600 to 6000 per day, since the broadcast of the series, notes Pierre Petitcunot.

And according to the British daily The Independent, searches for chess sets increased by 273% on the auction site Ebay, in the ten days after the arrival of the series on Netflix.

What to swell the ranks of the players? In France, women represent only 22% of the workforce in this discipline, which is often criticized for its sexism. An aspect too watered down according to some in the series.

In an interview with the New York Times , the Hungarian champion Judit Polgar, who bowed out in 2014, considers that the opponents of Beth Harmon are “too nice to her”, in view of the derogatory comments she has often received, some even refusing to shake his hand.

“The situation has changed a bit,” said Jocelyne Wolfangel, director of women within the FFE, which organizes, in parallel with mixed competitions, tournaments reserved for women to enhance their performance and attract more.

But “I have heard many times young boys say 'you lost against a girl, shame', she laments. The more women there are, the more they will have a real place. “

Teilor Stone has been a reporter on the news desk since 2013. Before that she wrote about young adolescence and family dynamics for Styles and was the legal affairs correspondent for the Metro desk. Before joining The Bobr Times, Teilor Stone worked as a staff writer at the Village Voice and a freelancer for Newsday, The Wall Street Journal, GQ and Mirabella. To get in touch, contact me through my teilor@nizhtimes.com 1-800-268-7116
Previous ArticleTLMEP: the other Adib Alkhalidey