The hunt-gallery and the little elves 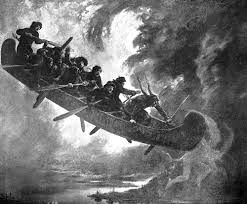 Share November 15, 2020 3:00 a.m. Updated at 9:00 a.m. Share The gallery hunt and the little elves CHRONICLE / The book Légende des Cantons-de-l'Est presents fifteen legends collected in our region during the years 1976-1977. Here are two of those legends.

There remained that one in the camp and the others were going to watch, at fifty miles, for example. There was a bark canoe that came in over the crust, over the snow. They were getting on board, and the guy leading this was the devil. They shouldn't pronounce the name of the Good Lord, nor of a Saint. The devil said:

They went up in the air, above the trees and they sang the hunting-gallery:

– It's the rowing that takes us up.

They were going to watch over their homes. The devil left them at home. Sometimes they stayed ten miles, fifteen miles, twenty miles! It was no big deal for him; it passed like a plane. The next day he picked them up, and then they came back. Coming back, there is one who said:

– My God! We're going to hang the spruce trees!

By saying “my God” there, they sacred the camp below. The canoe left them there. The worse they were forty miles from their camp, the worse they had been forced to walk. It was all guys from around. There were no other things than that: working at home in summer, worse in winter, going into the woods. It happened seventy years ago ”.

“My uncle Aimé, when he got up, he said:

– Ah! In the morning, I came ready to see elves. Chus came well ready, they had just come out!

The little elves weren't smart. We weren't afraid of the little elves. They were little fellows roughly that high, three feet. Worse they had a little pointed hat, little shoes that rolled up, and an eye in the forehead. They only had one eye, the worse it was in the forehead. But we weren't afraid at all, you know. I would love that they were green… they were dressed in green.

They took the horses at night, the horses were well braided. As they were small, they couldn't sit on the horse's rump; they sat on the neck!

That's why they braided there! They put their paws on each edge of the neck. The neck is not really wide, that! To ride on the horse, ah! Ben, the horse was in a port, the goblins were able to scale over it.

They were clever enough to get hold of each other. The horse was not bridled or anything. They put their feet on each edge of the neck and they stood with the braids. Worse, at the same time, they were playing, they were having fun. Sometimes they would take good hikes because their friends were far away. It was mostly moonlight.

The world arrived in the morning, the horse was soaked! It is true that he had his crigne all braided! Moé, I never saw any to tell, but I was sure they were telling me the truth. In the daytime, we couldn't see them, the elves. So we would have liked that; we looked in the barn sometimes.

Our grandfather, our grandmother, and an uncle there, they told us a lot of tales, they said:

– You are not looking properly, yet there! They had to be hidden somewhere below the hayloft!

Teilor Stone has been a reporter on the news desk since 2013. Before that she wrote about young adolescence and family dynamics for Styles and was the legal affairs correspondent for the Metro desk. Before joining The Bobr Times, Teilor Stone worked as a staff writer at the Village Voice and a freelancer for Newsday, The Wall Street Journal, GQ and Mirabella. To get in touch, contact me through my teilor@nizhtimes.com 1-800-268-7116
Previous ArticleCooking fire quickly mastered
Next ArticleWendake drama: the family “angry” with the system