The Legault team: a government of “uncles”, according to the liberal opposition 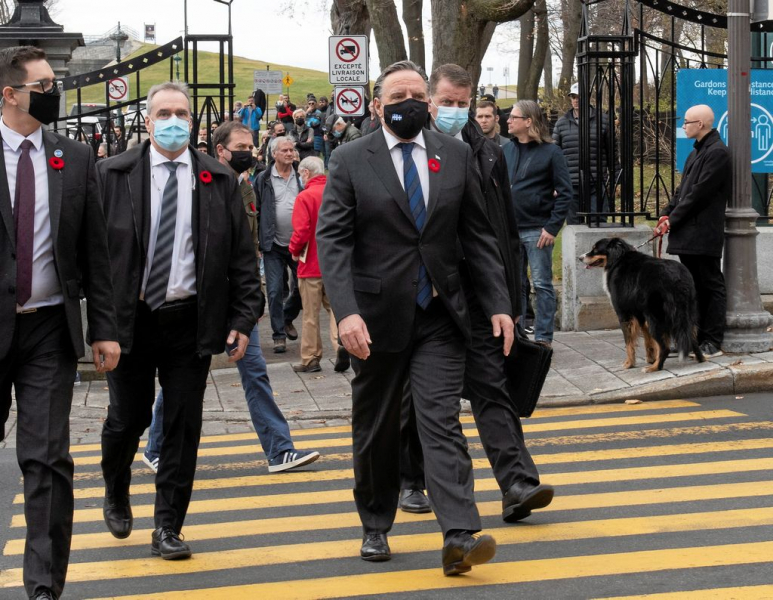 The Liberal spokesperson for the status of women, Isabelle Melançon, is convinced that François Legault applies a rule of “two weights, two measures”, when it comes to evaluating the performance of his ministers, depending on whether he it is a woman or a man.

Share November 11, 2020 6:14 pm Share The Legault team: a government of “uncles”, according to the liberal opposition Jocelyne Richer The Canadian Press Prime Minister François Legault heads a government of “uncles”, a “Boys Club” granting men privileges that he denies to the women of his team, according to the liberal opposition.

In a telephone interview with The Canadian Press on Wednesday, the Liberal spokesperson for the status of women, the member for Verdun, Isabelle Melançon, launched a charge against the government, regarding the different status that would be according to her to the men and women of the CAQ team.

She says she was stung by the Prime Minister's reaction to the publication of the ethics commissioner's report blaming the Minister of the Economy, Pierre Fitzgibbon,

According to her, this is a case of sexism. Mr Fitzgibbon was entitled to preferential treatment by being retained in office despite this blame, which would never have happened if he had been a woman, argued the MP.

And if he obtained this preferential treatment, it is because he is part of the small circle of power around the Prime Minister, that he is a man and a personal friend, she believes, convinced that Mr. Legault applies a rule of “two weights, two measures” when it comes to evaluating the performance of his ministers, depending on whether it is a woman or a man.

“Two weights, two measures. It's a Boys Club government. It is a government of my uncles. That's the CAQ, ”Ms. Melançon says.

“If Pierre Fitzgibbon had been a woman, there would have been a reshuffle in the last hours”, is persuaded the deputy.

She notes the cases of MarieChantal Chassé, packed into the Council of Ministers, “because she had communication problems, to make room for a guy”. Even though he is not a minister, she draws a parallel with the national director of public health, Dr Horacio Arruda, who also has communication problems, according to the prime minister's office, to the point of having hired this week a “coach” to supervise his public outings. Ms. Chassé, demoted simple deputy, after a few months of service, was not entitled to such a favor, says Ms. Melançon, adding that she had been replaced by a man, Benoit Charette, at the Environment.

” Two weights, two measures. It's a Boys Club government. It is a government of my uncles. That's the CAQ ”- Liberal spokesperson for the status of women, Isabelle Melançon

She adds that the ministers still in office Nathalie Roy and Danielle McCann have lost feathers. The first having had to cede the file of the protection of the French language, the second having ceded its place to Health to Christian Dubé, to find itself in Higher Education.

When she looks at the situation of the second wave of the pandemic and the increase in the number of COVID-19 cases, she concludes that Mr. Dubé “did not do better than Ms. McCann”.

The case of Sylvie D'Amours also caught his attention. The former Minister of Native Affairs also found herself in the back benches, as a simple member, once again “replaced by a guy”, Ian Lafrenière.

On her momentum, she lists other cases: Simon Jolin-Barrette, who orchestrated a “complete flop at Immigration: the PEQ (Quebec Experience Program).” Has anyone touched him? Not at all”. André Lamontagne, who made the headlines in the case of whistleblowers at the Ministry of Agriculture was also spared, notes the member.

Ms. Melançon recalls that the caucus of the ruling party has about thirty women and that during the last electoral campaign, Mr. Legault had committed to forming a parity government, a broken promise.

In this government, according to her, the proof is made that the Prime Minister protects the male ministers. “The men have nothing to fear and the women are always on the end of their chairs,” she concludes.

The Council of Ministers is made up of 16 men and 11 women.

Teilor Stone has been a reporter on the news desk since 2013. Before that she wrote about young adolescence and family dynamics for Styles and was the legal affairs correspondent for the Metro desk. Before joining The Bobr Times, Teilor Stone worked as a staff writer at the Village Voice and a freelancer for Newsday, The Wall Street Journal, GQ and Mirabella. To get in touch, contact me through my teilor@nizhtimes.com 1-800-268-7116
Previous ArticlePierre Fitzgibbon rejects the blame pronounced by the Ethics Commissioner
Next Article“Not the time to fool!” sum Marwah Rizqy