The traffic lights on Belvédère will be synchronized 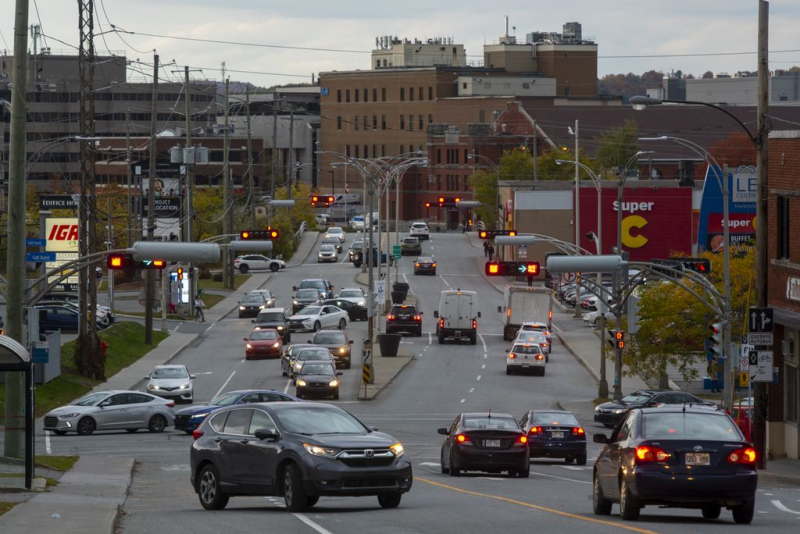 The traffic lights on Belvédère will be synchronized between Galt Ouest and Frontenac.

Jonathan Custeau La Tribune The traffic lights on Belvédère Street will be synchronized between Frontenac and Galt Ouest streets to allow for better traffic flow. The City proposes in the same direction to prohibit the turn to the left towards the rue des Fusiliers.

This intervention stems from the master plan for traffic lights, the recommendations of which began to be implemented in 2019, in particular with the programming of 20 traffic lights on Boulevard Bourque and Rue King Ouest, between Rue du Président-Kennedy and Rue Fraser. For 2020, priorities have been set on rue Galt Ouest, between Pacifique and Laurier, and on Belvédère, between Frontenac and Galt Ouest.

The synchronization of traffic lights aims for better fluidity, but also greater safety for pedestrians and cyclists.

An external firm has been appointed to offer optimal programming of the lights. Among the advanced interventions, we note an exclusive protection phase for pedestrians and a right turn on a red light prohibited at all times at the Belvédère and King Ouest intersection. Sound crossings for people with visual impairments are also planned at the intersections of rue Belvédère and rue King Ouest (in 2020) and rue Galt Ouest (in 2021).

Regarding the left turn towards rue des Fusiliers, we note that only 15 vehicles make this turn at rush hour, but that they do not have sufficient time to perform the maneuver. In other words, they block traffic for those who would like to continue straight. Visibility is also limited due to the railway viaduct.

Sébastien Dubuc, municipal engineering project engineer at the City of Sherbrooke, mentions that a left turn lane on Galt Ouest will also aim to improve fluidity. “With the exclusive phases to stop traffic at all four corners while pedestrians are crossing, you can expect a drop in performance at these intersections. But reprogramming will compensate. We are coming to standardize travel times during rush hour. For rue des Fusilliers, it should be noted that it is easily accessible by rue Camirand, passing by rue King Ouest. For a one minute detour, it's easy. “

The exclusive left turn towards the Marché de la Gare, heading north, would be retained.

Councilor Marc Denault wanted to know if any work planned on Belvédère will be done next year, at the same time as the major work on Galt Street West.

“The two networks have to work together, so we'll do the work on Belvédère first. Galt Ouest, it is planned for 2021. We will not do both at the same time because we expect motorists to use Belvédère for transit during work on Galt, ”replied Mr. Dubuc.

Évelyne Beaudin was concerned about the fate of cyclists, particularly at the intersection of Galt and Belvédère streets. Could the installation of an airlock, a space in front of vehicles to give priority to the bicycle during left turns, be an option?

Jocelyn Grenier, Deputy Director of the Urban Infrastructure Service, replies that cyclists who wish to turn left at this intersection will have to behave like pedestrians. “We will allow them to have a stop line in front of the vehicles for straight ahead movements and right turns. They will have their own corridor. Those who want to turn left will have to request the exclusive pedestrian crossing. I'm not saying that airlocks won't come, but we don't believe that in 2021, this will be the solution. “

Finally, Rémi Demers reports that sound crossbars sometimes stop working in the evening. He indicates that the Quebec Ministry of Transport recommends that they be active 24 hours a day.

“The objective is to comply with the requirements of the ministry”, assures Sébastien Dubuc.

The Société de transport de Sherbrooke has been consulted and agrees with the proposed changes.

Teilor Stone has been a reporter on the news desk since 2013. Before that she wrote about young adolescence and family dynamics for Styles and was the legal affairs correspondent for the Metro desk. Before joining The Bobr Times, Teilor Stone worked as a staff writer at the Village Voice and a freelancer for Newsday, The Wall Street Journal, GQ and Mirabella. To get in touch, contact me through my teilor@nizhtimes.com 1-800-268-7116
Previous ArticleDemolitions in Deauville in anticipation of the leisure area
Next ArticleCrowdfunding against the Chemin Rhéaume project