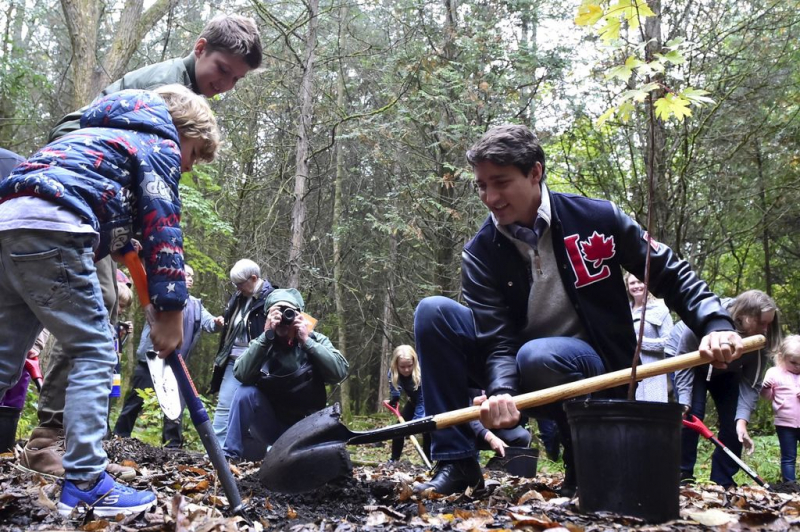 Accompanied by his sons Xavier and Hadrien, Justin Trudeau plants trees during an election campaign activity on October 6, in Plainfield, Ontario.

Share November 2, 2020 2:00 p.m. Share The two billion trees promised by Trudeau are still awaiting funding The Canadian Press OTTAWA – The massive tree planting promised by Prime Minister Justin Trudeau after the 2019 election has not yet received a single penny of funding.

Beth MacNeil, assistant deputy minister at the Canadian Forest Service, explains that during the current consultations, there is no specific plan on how the new plantings will be carried out.

MacNeil admitted to the Commons Natural Resources Committee on Friday that the Forest Service was still waiting to receive an operating budget for the program.

Alberta Conservative MP Rachael Harder finds it “shameful” that the Liberal government still has not invested in this promise.

Mr. Trudeau had presented the massive tree planting program as an essential element of Canada's strategy to combat climate change.

Ms. MacNeil believes that the “solution” to climate change necessarily lies in, among other things, forests, which absorb and store carbon dioxide.

Teilor Stone has been a reporter on the news desk since 2013. Before that she wrote about young adolescence and family dynamics for Styles and was the legal affairs correspondent for the Metro desk. Before joining The Bobr Times, Teilor Stone worked as a staff writer at the Village Voice and a freelancer for Newsday, The Wall Street Journal, GQ and Mirabella. To get in touch, contact me through my teilor@nizhtimes.com 1-800-268-7116
Previous ArticleFinal sprint for Donald Trump and Joe Biden
Next ArticleEthics Committee: the Bloc tries to correct its mistake, the NDP opposes it