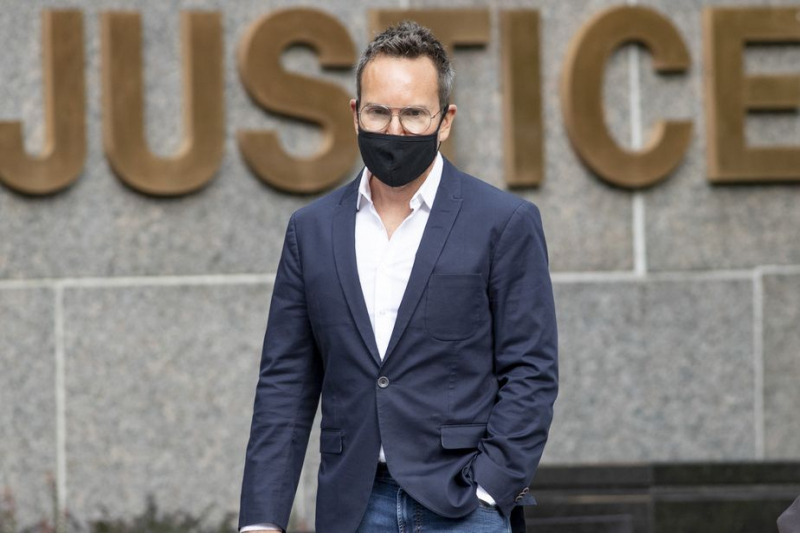 Share November 9, 2020 10:08 a.m. Updated at 6:58 p.m. Share Three former colleagues of Eric Salvail reported unwanted touching Stéphanie Marin The Canadian Press MONTREAL – Eric Salvail's trial resumed Monday with the filing of statements made to the police by three of his former co-workers. They report inappropriate sexual comments, unwanted touching from the former star host who would also have exhibited in front of one of them. “He crossed the line,” said one of the men.

They were expected in person at the Montreal courthouse, but all three eventually testified through their police-recorded statements in March.

Éric Salvail is currently on trial for sexual assault, harassment and forcible confinement of Donald Duguay, for events that allegedly took place in 1993.

The defense waived its right to cross-examine the three men. Their declarations are therefore accepted as such by Judge Alexandre Dalmau of the Court of Quebec.

The Crown's objective with these new witnesses was as follows: Éric Salvail testified at his trial that he is not the type of person to commit the acts alleged by Donald Duguay. In doing so, he opened the door to a debate on his supposed “good reputation” and the positive vision of himself that he offered, had previously argued the Crown prosecutor, Me Amélie Rivard, to have the right to call these additional witnesses.

They were therefore to serve to refute the accused's testimony on this subject, and to attack his credibility. Eric Salvail is not, however, on trial for the actions reported by the three men and no charges have been filed against him in this regard.

The version offered by the accused disturbed one of the witnesses: “To see that he denied en bloc, that he never crossed the line, that annoyed me a lot”, can we hear in the audio tape.

The 51-year-old accused was also not present at the Montreal courthouse on Monday: he listened to the proceedings by videoconference.

The three men cannot be identified by court order. They did not file a complaint with the police: it was rather the investigators who asked to speak to them. An audio version of their testimony – redacted so as not to identify other people, among others – was placed in the court file.

One of these men told of the end of the day at work during which Eric Salvail entered an office where he was alone. The accused approached him from behind, and put his hand in his pants, until he touched his testicles.

“It was intense,” he told investigators.

He pushed him away and headed for the elevator to leave the offices. Eric Salvail followed him into the corridor and lowered his pants to show off his penis, he said.

Another recounted that from the first day he met the accused, sexual allusions started, such as “I am sure you have a nice penis” or “are you circumcised?”

It was repetitive, he said, stressing that he was “on his case.”

He said he was “annoyed” by the host's behavior, but that he did not feel “attacked”. But one day he went too far, he continued.

While managing a media crisis, Eric Salvail approached him, grabbed him from behind and rubbed himself against him.

“There, that was too much for me,” said the man who reports pushing him vigorously. “He crossed the line. It was not good-natured humor. ”

He says the ex-host also followed him to the bathroom one day – he closed the door and it ended there – and on another occasion he threw a plastic penis in his face.

According to him, Eric Salvail liked to shock and destabilize people, a formula that worked well for him in his work as a crowd leader.

After following the first portion of the trial, he was of the opinion that the accused “got away with it”. “He's not white as snow.”

After the filing of these declarations, Me Rivard declared his evidence closed.

The trial and procedures

The charges against Eric Salvail are as follows: Donald Duguay alleges that he was kidnapped and sexually assaulted in October 1993, that is to say almost 27 years ago, in a Radio-Canada bathroom, after several months in advance, of harassment, sexual comments and inappropriate touching in the workplace. On another occasion, the accused exhibited his sex to him, Mr. Duguay testified.

He lodged a complaint against the ex-host in 2017 and himself asked to be identified publicly.

Éric Salvail testified at his trial and denied all the allegations he was the subject of. He even described as “eccentric” the episode of sexual assault and kidnapping told by Donald Duguay. The man also argued on several occasions that he was no longer working at Radio-Canada when the actions for which he was accused were allegedly performed in a toilet of the Crown corporation.

The trial began in February in Montreal and lasted four days.

The proof being completed, the pleadings will begin Wednesday. Two days are planned. The accused should not be present as he plans to listen to the performances by videoconference.

Teilor Stone has been a reporter on the news desk since 2013. Before that she wrote about young adolescence and family dynamics for Styles and was the legal affairs correspondent for the Metro desk. Before joining The Bobr Times, Teilor Stone worked as a staff writer at the Village Voice and a freelancer for Newsday, The Wall Street Journal, GQ and Mirabella. To get in touch, contact me through my teilor@nizhtimes.com 1-800-268-7116
Previous ArticleWait in uncertainty
Next ArticleMeasures in the Red zone: the CSSRS has until Friday