Three years for a fraudster who will be deported from Canada 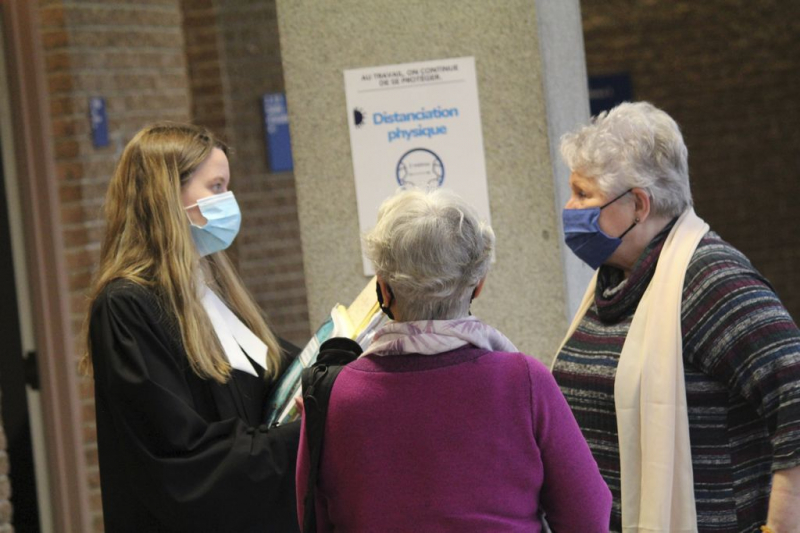 The prosecutor for criminal proceedings Me Véronique Gingras-Gauthier talks with the president of the Federation of housing cooperatives in Estrie Carole Vallerand and the treasurer Ginette Landelle after the imposition of the sentence on Marie-Élodie Huon.

René-Charles Quirion La Tribune Marie-Élodie Huon was sentenced to three years in prison for defrauding two Sherbrooke employers for an amount of $ 272,600.

Upon release from prison, this French national will likely be deported from Canada under the Immigration Act.

Between February and June 2019, the 34-year-old woman first defrauded the Federation of Estrie Housing Cooperatives and six cooperatives that are members of it.

Dismissed, she found a new job at Avantage Carr Estrie, which she defrauded in the fall of 2019.

“The punishment is not exaggerated, but appropriate. The accused did not prevent herself from reoffending after pledging not to have access to bank accounts other than her own. The criteria of denunciation and deterrence must take precedence, ”said Judge Hélène Fabi of the Court of Quebec in imposing the sentence on Thursday at the Sherbrooke courthouse.

It is to keep her head above water during an incredible story of international fraud with a so-called American army soldier injured in Syria that Marie-Élodie Huon would have carried out these two important frauds recognized in front of the court.

“He made him believe in an unimaginable story,” said Judge Fabi in imposing the sentence.

Once pre-trial detention is removed, Marie-Élodie Huon will have to spend another 21 months behind bars. Probably the victim of an international network of fraudsters, the woman with no criminal record from Sherbrooke in turn defrauded two employers in an attempt to help a “friend” she met on social networks.

Until her release investigation in January 2020, the 34-year-old believed the story she was engulfed in for several months.

After a few weeks, the alleged soldier asked him for a first sum of money in Bitcoins cryptocurrency so that he could be repatriated to his home in the United States since he had been wounded in combat in Syria.

The money sent was then intercepted by the commander of the said soldier, who was arrested at the Philippine border for arms trafficking.

The Canadian permanent resident would then have been threatened by the alleged authorities of the Philippines with being extradited there for complicity, since the alleged commander had claimed that she was an accomplice. She then transferred another amount as a fine, still in Bitcoins.

The fraudulent scheme continued as her soldier friend told her that she would eventually be reimbursed in cash. But this sum was blocked this time in the United Kingdom. Marie-Élodie Huon once again channeled money to resolve the situation.

Cash advances, bank transfers, fake checks and even cryptocurrency transfers were made by Marie-Élodie in 26 fraudulent transactions.

Colleagues from the Estrie housing cooperative federation discovered her frauds, but she then defended herself by saying that she had been hacked.

Fired in July 2018, she defrauded her new employer before being arrested a second time.

Two members of the board of directors of the Federation of Estrie Housing Cooperatives attended the imposition of the sentence by Judge Fabi.

“I am not delighted with the pain Marie-Élodie received. But she knew what she was doing. It's a shame because we trusted her. I want this type of penalty to be a deterrent for people who would be tempted to do the same thing, ”explains Carole Vallerand, president of the Federation of Housing Co-operatives in Estrie.

Teilor Stone has been a reporter on the news desk since 2013. Before that she wrote about young adolescence and family dynamics for Styles and was the legal affairs correspondent for the Metro desk. Before joining The Bobr Times, Teilor Stone worked as a staff writer at the Village Voice and a freelancer for Newsday, The Wall Street Journal, GQ and Mirabella. To get in touch, contact me through my teilor@nizhtimes.com 1-800-268-7116
Previous ArticleSmuggler has his merchandise and van seized
Next ArticleDrug search carried out in Asbestos