Trudeau speaks to nation, calls for more effort against pandemic 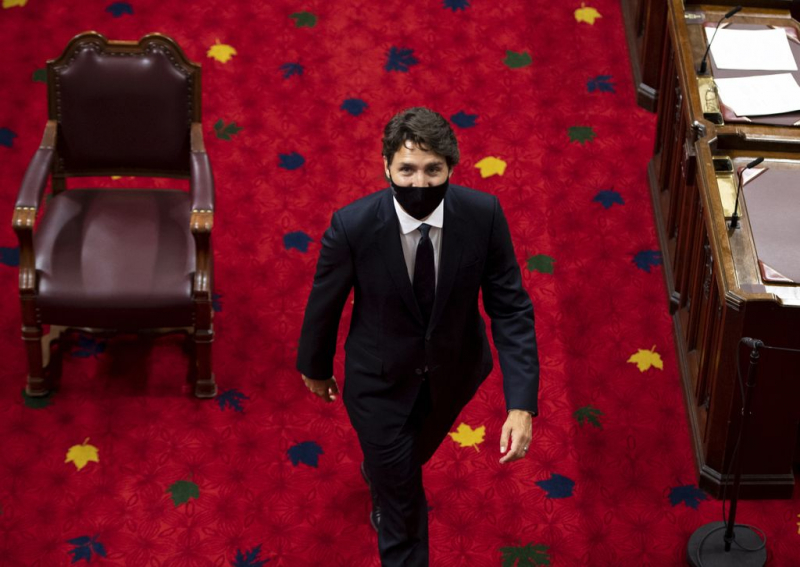 The initiative was all the more surprising given that a few hours earlier, he had entrusted the reading of a Speech from the Throne to the Governor General to announce his intentions for the months to come.

In the early evening, requisitioning the airtime of the country's television networks, the Prime Minister pleaded for Canadians to redouble their efforts to slow the pandemic, then, very quickly, he returned to his political agenda.

“In the spring, we all worked together to flatten the curve, and our efforts paid off. But now, the virus is making a comeback in several parts of the country, ”he said.

After saying that the coming fall could turn out to be a lot worse than last spring, he ensured that it was still possible to dream of dating over Christmas, even though it is too late for Thanksgiving.

“Now is not the time to party. No one is invincible. And your relatives are not either, ”said the Prime Minister in all simplicity.

He again presented the arguments for the use of the COVID alert application, an application that the Legault government did not want and which is therefore not available in Quebec. It is in place in Ontario, Saskatchewan, New Brunswick and Newfoundland and Labrador.

“It's easy and free, it preserves your privacy, and it's a gesture that will protect you, and the people around you,” he insisted.

Then, he turned to his government's promises, summing up in ten minutes the document read for more than an hour by Julie Payette.

“The situation experienced by too many of our seniors in long-term care centers is unacceptable. It has to change, and it will change, ”he said. “We are going to work now with the provinces and territories to establish new national standards for long-term care,” he said.

He took up several other commitments from the Speech from the Throne and he responded to critics who criticize him for all these expenses.

“Doing less would cost us more in the end,” he argued.

The whole exercise was quickly transformed into an ordinary political game, the leaders of the opposition parties, who also had the right to a few minutes on television, each putting their own.

“Mr. Trudeau says we're in this together, but Canada has never been more divided. (…) This Speech from the Throne has just shown that things will be worse in the future, because Mr. Trudeau does not understand the real needs of Canadians, ”said Conservative leader Erin O'Toole who recorded his performance outside his home in Ottawa, where he is confined because of the infection with the coronavirus.

“The Government of Quebec and the Bloc Quebecois agree; this Speech from the Throne is an affront to the skills and demands of the National Assembly of Quebec and does not deserve the support of Quebec ”, hammered the Bloc leader Yves-François Blanchet, also in front of his residence in Shawinigan, because that he too has COVID-19.

“I know COVID-19 has revealed some big issues, but these are not issues that are new. Many of these problems existed before the pandemic and Justin Trudeau was in power with a majority government and did not solve these problems, ”swayed Jagmeet Singh, New Democrat leader.

“Me, I felt a politician who sold his salad because it was not an appeal to the nation, it was a party leader who explained his policies”, criticized the deputy Gérard Deltell while speaking, of course. , of the Prime Minister.

“It was not useful, it was futile,” added New Democrat MP Alexandre Boulerice.

Both ignored the partisan tone of their own leaders.

However, the three opposition leaders also alluded to this painful pandemic.

“The situation my family is going through shows that we must remain very vigilant in the fight against COVID-19,” said Mr. O'Toole. His partner, like him, is showing symptoms of COVID-19.

“We see you, we hear you and we will continue to fight for you,” Singh said.

“In the face of adversity, let us continue to be brave and confident in our future,” offered Mr. Blanchet.

The Prime Minister, to finish his speech to the nation, tried to inspire his listeners.

“Canadians, we are people who say: 'I am capable'. In every sector, across the country, each of us is doing our part, ”he said.

“We are at a crossroads and the future is in our hands,” he concluded.

Teilor Stone has been a reporter on the news desk since 2013. Before that she wrote about young adolescence and family dynamics for Styles and was the legal affairs correspondent for the Metro desk. Before joining The Bobr Times, Teilor Stone worked as a staff writer at the Village Voice and a freelancer for Newsday, The Wall Street Journal, GQ and Mirabella. To get in touch, contact me through my teilor@nizhtimes.com 1-800-268-7116
Previous ArticleSpeech from the Throne: the fate of the Trudeau government still uncertain
Next ArticleMarguerite Blais blames some of the blame for the CHSLD fiasco on Legault and Arruda