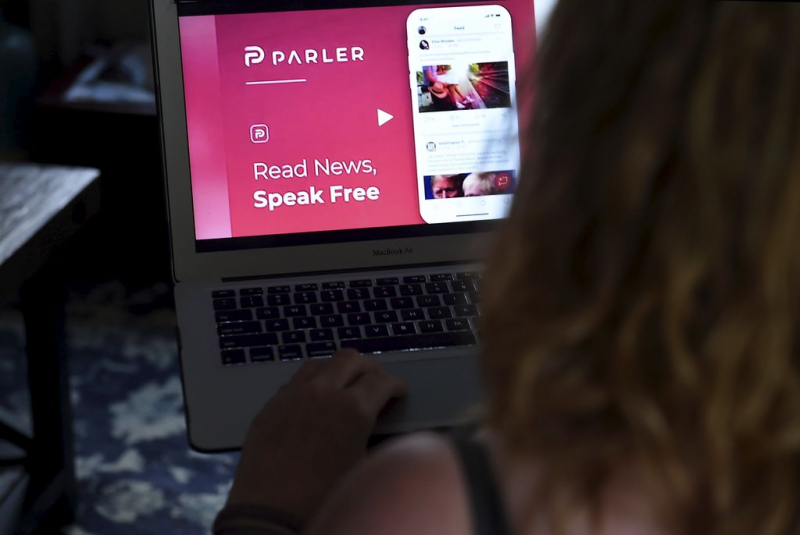 The main beneficiary of this phenomenon is the social network Parler, whose application has been downloaded more than three million times from Apple and Google online stores since the election.

Share November 15, 2020 8:56 a.m. Share Trump's loyalists flock to “alternative” platforms Rob Lever Agence France-Presse WASHINGTON – Convinced that Donald Trump had his presidential election stolen and ulcerated by the moderation of the messages of the Republican billionaire on Twitter or Facebook, the conservative American right, has been migrating en masse for several days to so-called “alternative” sites.

The main beneficiary of this phenomenon is the social network Parler, whose application has been downloaded more than three million times from Apple and Google's online stores since the election, and has been installed 7.3 million times since its launch, according to the specialist site SensorTower.

The far-right TV channel Newsmax, dubbed by Mr. Trump, as well as social networks like MeWe and Rumble, have also benefited from this migration.

None of these platforms filter deceptive or deceptive content claiming, without proof, that massive fraud has taken place in many key states to disadvantage the president.

These networks are no longer only the prerogative of extremist fringes, but also attract more traditional conservative voices, frustrated by the big platforms, explains Bret Schafer, specialist in disinformation for the NGO Alliance for Securing Democracy.

“It is not unprecedented to see migrations after more severe measures taken by the giants of social networks”, he underlines. “But this time it looks a little different.”

Republican parliamentarians have joined Speak, as has Donald Trump's campaign team, which is now broadcasting certain press releases on the application.

“We do not yet know if this is a symbolic protest against Twitter and Facebook or if it will be more serious and lasting,” asks Daniel Kreiss, lecturer at the Center for Information Technologies of the University of North Carolina.

“But the dynamic is clear: the conservatives are angry with the moderation of content, particularly those of the president,” he notes.

The laissez-faire policy of the big social networks, for years, prompts many conservative voices to wonder why Facebook and Twitter have suddenly taken an about-face, Kreiss points out.

As a result, Parler found itself propelled to the top of the list of most downloaded apps on Apple's online store.

“A lot of people who have an account on Talk are no longer happy with Facebook and Twitter because of Big Tech censorship and media dishonesty,” one user of the App Store wrote in the comments. application.

“Talking is still in its infancy, but it will welcome more and more conservatives,” she predicts.

Having become central spaces of political debate, Twitter and Facebook encounter great difficulties in making the trade-off between the moderation of manipulative and potentially harmful content on the one hand and the expression of diverse and varied opinions on the other.

For some civil society actors, the lack of safeguards on sites like Parler, where racist and anti-Semitic messages or death threats can be freely disseminated, is problematic.

“Giants like Apple and Google have a real responsibility and should ask themselves what they make possible by hosting an application like Parler on their online stores,” says Eric Naing, media relations manager for the association. Muslim Advocates.

For Daniel Kreiss, the growing popularity of “alternative” networks, on the right and on the left, is a sign of extreme polarization on the internet, which “is not a good thing for civic discourse.”

This split threatens the holding of calm conversations on matters of public interest, which are nevertheless necessary for the proper functioning of a democracy.

The impact of these networks remains limited, however, believe many specialists, who stress that the large platforms maintain their hegemony online.

Facebook and Twitter have much more advanced technologies than those of sites like Parler, whose application seems to have multiple technical flaws, according to the comments of some frustrated users.

In addition, while many Conservative officials have joined Talk, the vast majority continue to use Twitter.

“They need to go where the general public is,” says Kreiss.

Teilor Stone has been a reporter on the news desk since 2013. Before that she wrote about young adolescence and family dynamics for Styles and was the legal affairs correspondent for the Metro desk. Before joining The Bobr Times, Teilor Stone worked as a staff writer at the Village Voice and a freelancer for Newsday, The Wall Street Journal, GQ and Mirabella. To get in touch, contact me through my teilor@nizhtimes.com 1-800-268-7116
Previous ArticleChina strengthens with signing of world's largest free trade agreement
Next ArticleWall Street little moved by Donald Trump's maneuvers