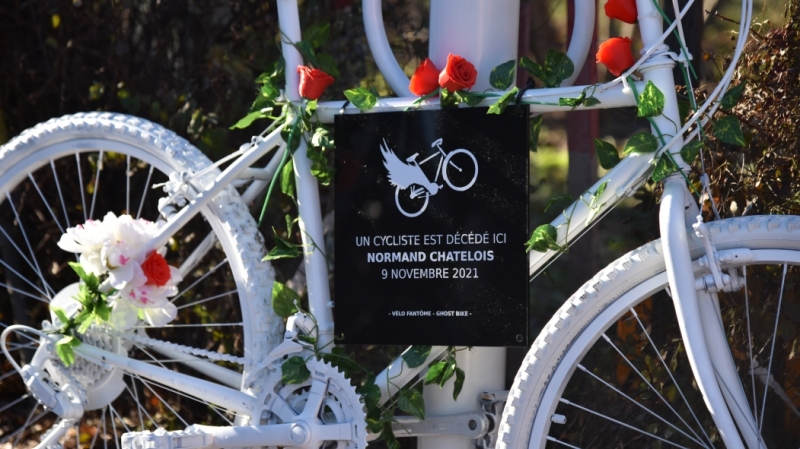 A white bicycle and a commemorative plaque were installed in memory of Normand Chatelois on Sunday, at the place where the cyclist suffered a fatal road accident on November 9 at the beginning of the afternoon.

The man is described by the organization Ghost Bike as an avid cyclist. “Normand Chatelois loved his bike, but he also loved the bike. In the 1980s, he was even a competitive cyclist and was among the best in Quebec. He loved his bike, which was his only valuable item and his only means of travel. “

He had lived near here for 12 years old and, on November 9, he was going to do his errands. Quite simply.

The 66-year-old man was struck by a dump truck at the corner of boulevard Saint-Laurent and rue de Liège, in the Villeray district. First transported to a hospital in critical condition, the victim succumbed to her injuries the next day. Witnesses said the accident occurred when the truck made a right turn onto de Liège. The cyclist then got stuck under the truck.

The organization explains that a ghost bicycle is a bicycle painted white, installed at the exact spot where a cyclist died in a collision on the road. The objective is both to honor the memory of the person but also to “provoke a reflection on the dangers of motorized vehicles”.

Ghost bike is campaigning for design rules to be put in place near trucks so that drivers have more visibility. In fact, half of the ghost bikes installed by the organization are linked to accidents with trucks. “Truck drivers should not have to work with vehicles that make them almost blind,” argues Ms. Le Page. The Minister of Transport of Canada, Omar Alghabra, is called by Ghost Bike, to regulate the design standards of heavy goods vehicles allowing a “direct vision”.

Other actions are requested from the city like protected cycle lanes in every major artery or “arrowhead” traffic lights allowing pedestrians and cyclists to clear an intersection before motorists and truckers begin their turn ”for example.

C & rsquo; is the 16th ghost bike installed by the organization.

Teilor Stone has been a reporter on the news desk since 2013. Before that she wrote about young adolescence and family dynamics for Styles and was the legal affairs correspondent for the Metro desk. Before joining The Bobr Times, Teilor Stone worked as a staff writer at the Village Voice and a freelancer for Newsday, The Wall Street Journal, GQ and Mirabella. To get in touch, contact me through my teilor@nizhtimes.com 1-800-268-7116
Previous ArticlePower outages: repairs will stretch until tomorrow
Next ArticleHow to spice up your holiday brown eating?