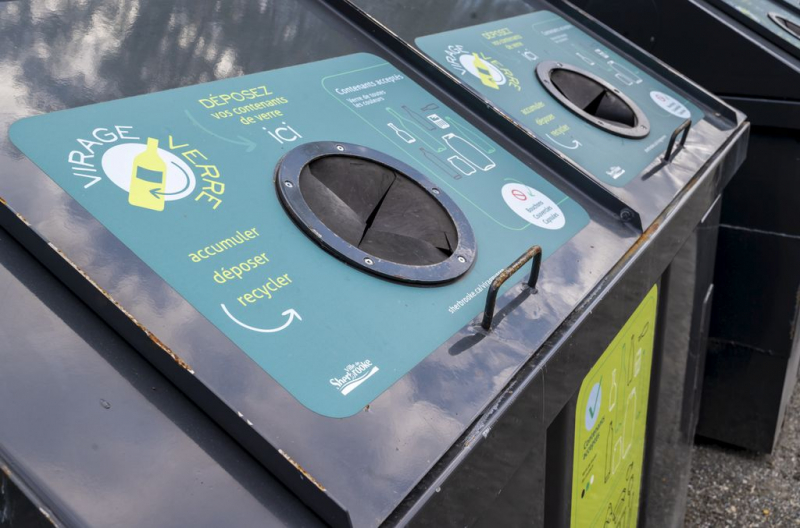 The voluntary collection of glass achieves the objectives set by the City, which recommends continuing the pilot project.

Jonathan Custeau La Tribune SHERBROOKE – The voluntary glass collection pilot project, set up in Sherbrooke in July, is enjoying the expected success, so much so that 130 tonnes of glass have already been sent to 2M Resources in Saint-Jean-sur-Richelieu. While the City is trying to reduce the number of collection points from six to ten, it is already considering exceeding the weekly capacity for transporting materials.

Marie-Andrée Charron, environmental project officer at the City of Sherbrooke, reports that the weekly average fluctuates between eight and ten tonnes of glass, with an upward trend approaching ten tonnes. A peak was reached on Thanksgiving weekend with 12.37 tonnes. The maximum transport capacity is 13.2 tonnes. It seems that the quality of the glass and the type of container deposited meet the criteria of 2M Resources.

“This explains why we are already looking for alternatives to adapt. If we add collection points, it is possible to think that there will be a transfer of the glass from one point to another, but it is possible that there is an increase in the tonnage collected ”, admits Ingrid Dubuc , Director of the Environment Office.

Currently, four containers are installed at Lucien-Blanchard beach, three at the Julien-Ducharme center, three near the Rock Forest borough office, one at Jules-Richard park, one at the Brompton borough office and one at the Richard-Gingras community center. Negotiations are practically over for containers on three private sites that the City did not want to reveal on Monday, while negotiations have begun for a fourth site. “Our objective is to have an equitable geographical distribution by choosing sites complementary to those we already have”, specifies Ms. Dubuc.

New containers will need to be purchased to add collection sites.

We will have to wait for the results of a whole year to assess the real impact of this collection on the tonnage received at Recup Estrie. A preliminary estimate shows 20% of the glass that would be diverted after a year if the current rate is maintained. A full report for the first year is expected to be filed in fall 2021.

Some of the main problems observed were noise, broken glass on the ground, resistance of containers and signage. In this sense, two drop-off points have been moved following complaints from the neighborhood. These are those on rue Marcil, near Jacques-Cartier Park, and the Ivan-Dugré arena, which has been moved to Lucien-Blanchard beach. The container located next to the borough office in the Brompton sector should also be moved to the industrial park. Councilor Nicole Bergeron insisted that citizens be adequately informed of this change.

Tests are underway with thermo-molded plastic containers to reduce noise. These have been installed at the Brompton and Rock-Forest-Saint-Élie-Deauville borough offices. They are more resistant, effectively reduce noise and limit shards of glass. The road team is also working on a funnel system to limit these shards of glass that fall to the ground during collection.

Among the measures to come, note the addition of a collection point in Lennoxville and the addition of signage to guide motorists to the sites selected for the deposit of glass.

Marc Denault reiterated his suggestion to install a collection point near the Rose-Cohen ecocentre, arguing for the proximity of the Carrefour de l'Estrie and the absence of neighbors.

Ingrid Dubuc indicated that this idea was currently being analyzed.

Chantal L'Espérance, she pleaded for an alternative solution to the container removed from Jacques-Cartier Park.

Patrice Charbonneau, environmental project manager, specified that the ideal site at Jacques-Cartier Park is very close to the bike path and that this activity is not compatible with the maneuvers required to empty the bins.

Nicole Bergeron noted that citizens quickly adopted new habits and that they were ready to bring the glass in the designated containers.

Finally, the Quebec government had already announced its intention to adjust the deposit and selective collection of glass. The terms of these new collections should be known at the beginning of 2022. The president of the environment committee, Karine Godbout, has sounded the alarm to ensure that the government of Quebec will be sensitive to municipalities that have already adopted successful voluntary collection of non-returnable glass.

Teilor Stone has been a reporter on the news desk since 2013. Before that she wrote about young adolescence and family dynamics for Styles and was the legal affairs correspondent for the Metro desk. Before joining The Bobr Times, Teilor Stone worked as a staff writer at the Village Voice and a freelancer for Newsday, The Wall Street Journal, GQ and Mirabella. To get in touch, contact me through my teilor@nizhtimes.com 1-800-268-7116
Previous ArticleMission: reduce traffic on the Cégep campus
Next ArticleRémi Demers will not seek a new mandate