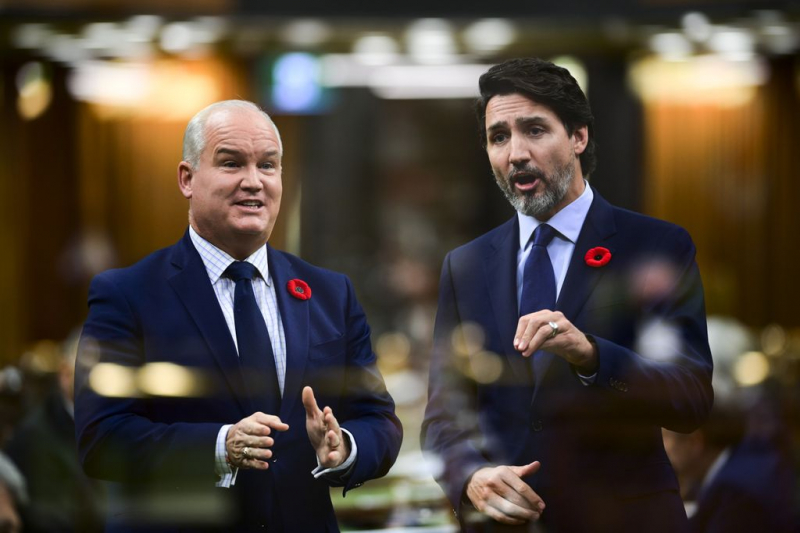 Photo-montage of Conservative Leader Erin O'Toole and Prime Minister Justin Trudeau in the House of Commons in Ottawa, November 4

The web survey carried out from November 4 to 9 with a panel assembled by the Angus Reid Institute indicates that 35% of respondents, including the undecided, support the Liberals and 33% the Conservatives.

The New Democratic Party (NDP) garners 18% of popular favor, compared to 5% for the Green Party (PV) of Canada.

Liberal Leader Justin Trudeau's popularity is 49%, up slightly from last summer. Conservative leader Erin O'Toole has enjoyed a 30% to 36% increase in his favorable rating since September, but the percentage of people who do not view him favorably has jumped from 31% to 40%.

Unsurprisingly, the poll observes that dealing with the coronavirus crisis is the number one concern of Canadians these days. Among respondents, 65% believe that the Liberal government is doing a good job while 32% believe the opposite. The highest support for the Liberals was found in the Atlantic, at 78%.

The survey was conducted among 1,602 adult Canadians. No margin of error could be calculated.

A new poll observes a near equality in the voting intentions of Canadians between the Liberal Party of Canada (PLC) and the Conservative Party (CPC). THE CANADIAN PRESS

Teilor Stone has been a reporter on the news desk since 2013. Before that she wrote about young adolescence and family dynamics for Styles and was the legal affairs correspondent for the Metro desk. Before joining The Bobr Times, Teilor Stone worked as a staff writer at the Village Voice and a freelancer for Newsday, The Wall Street Journal, GQ and Mirabella. To get in touch, contact me through my teilor@nizhtimes.com 1-800-268-7116
Previous ArticleVoting intentions in Canada: virtual equality between Liberals and Conservatives
Next ArticlePierre Fitzgibbon rejects the blame pronounced by the Ethics Commissioner